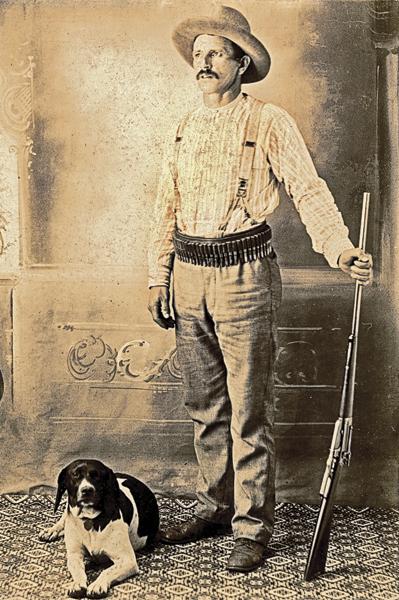 My grandpa, Claude Baker, used to love to tell jokes and stories.  He was good at it and got so tickled when he finished.  He used to tell a story about a dog named, “Love”, that went like this.

“A frontiersman was out hunting with his dog, Love.  They were captured by Shawnee.  The frontiersman knew that the Shawnees would kill him, but he also knew that they loved riddles.  When he was brought before their Chief, he told him, “I wager my life that I can give you a riddle that you can’t solve.  If you solve it, you can kill me.  If you can’t, set me free.”  The Shawnee Chief was interested and agreed.  He told him that they would be back at the next dawn to hear this riddle.

The frontiersman had bought himself some time, but he couldn’t think of a riddle.  While worrying over his situation, his faithful dog could tell that he was upset and tried to console him.  This gave him an idea.  Although it broke his heart, he knew what he had to do.

The next morning, the Shawnee returned.  The Chief asked the frontiersman if he had a riddle for him.  He said that he did and began to recite it.

Love I hold in my right hand.

Love I see in yonder tree.

If you can solve this riddle, you can kill me.”

The Shawnee Chief pondered on this riddle and had no idea what it meant.  He told the frontiersman that he would let him live, but he must explain the riddle.  The frontiersman sadly explained that his dog was named, “Love”.  He had killed him and cut him in pieces.  One piece was in his back pocket.  One piece was in his boot.  He held a piece in his hand and had placed another piece up on the limb of a tree.  The Chief agreed that this was a good riddle and let him go.”