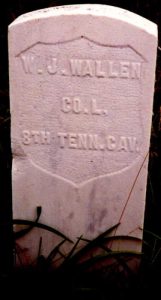 William J. “Big Sandy” Wallen, 1816-1886. He has a veteran’s headstone, due to serving in “Company L, 8th Regiment of the United States Army of Tennessee”. His son Joe B. Wallen, who is buried here also, was conscripted by the Confederate Army, captured at Vicksburg, paroled, then joined the Union Army with Big Sandy.