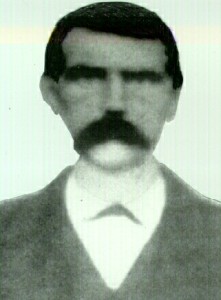 William J. “Big Sandy” Wallen was known for his legendary strength. He was born and raised on the Wallen family farm on the Clinch River at Kyles Ford, Tennessee.

He served in the Union Army during the Civil War.   Big Sandy enlisted December 18, 1863 at Camp Nelson, Kentucky.  Big Sandy was 47 years old at his enlistment and evidently the rigors of military life were too much for a man of his age, for he was medically discharged at Knoxville April 15, 1865. Big Sandy Wallen was in Company L, 8th Tennessee Volunteer Cavalry and was a Private.

It is said that most of the men would carry 3 bushels of corn to the mill to be ground. Big Sandy was able to carry 7 bushels. He once came upon a group of men and a team of oxen moving a large stone to a building site. The oxen had pulled the stone until they were worn out. Big Sandy said if the men could lift the stone onto his shoulder, he’d carry it the rest of the way to the building site. The stone was lifted to his shoulder and he did carry it the rest of the way.

Big Sandy Wallen was a blacksmith and farmer. He could hold his anvil in one hand with his arm stretched straight out. If he was working on a skittish horse, Big Sandy would knock the horse out with one blow from his fist. My branch of the Wallen family is known as the “Big Sandys”.

Where did Lee County get its name?