The small community of Blackwater has been mostly unnoticed by historians of southwest Virginia. It was given its name of Blackwater by the first hunters that ventured into the area perhaps as early as the 1750s.
At that period of time, a spring or stream that contained minerals such as common table salt was referred to as Blackwater [Etymology: “The history of linguistic form”] The term brackish water derives from the Low Saxon word brackwater, which is the water of a brack. A brack is a small lake created when a storm tide breaks a dike and floods land behind the dike.  Low Saxon (in Low Saxon, Plattdüütsch, Nedderdüütsch or Neddersassisch) is any of a variety of Low German dialects spoken in northern Germany and the Netherlands. It also includes Plautdietsch, which is spoken by Mennonites in North America.
Blackwater is located at the crossroads of the old trading route from the Cumberland River to the Cherokee nation in East Tennessee and the old hunters trace from the New River to Kentucky. Today, Blackwater is an isolated community as to commerce and transportation, but it was not so isolated in the mid eighteenth century due to the large Buffalo lick. Over the eons of time, herds of buffalo had carved out trails radiating out from the lick to the grazing meadows in Powell Valley, Rye Cove, and south to the Clinch River valley. Herd animals would travel great distances to a salt lick to replenish their need for salt, an essential mineral in their diet. A salt lick is a site where the soil and rocks contain a natural deposit of salt and was called a lick because the animals would lick the soil or rocks to a depth of several feet to satisfy their need for this essential element.

A salt lick was the favorite hunting site of the Indians and long hunters. The hunters would position themselves at strategic points along the trails the animals traveled to the lick and make their kill. Numerous historical records of the frontier give accounts of the well known licks such as the Bledsoe lick in Sumner County Tennessee, the Blue lick in central Kentucky and the French lick in southern Indiana, but little is known about the large lick at Blackwater. Perhaps this is because the Blackwater lick was discovered at least a quarter of a century before the licks in Sumner County in Tennessee, Kentucky, and Indiana and by the time of their discovery the pressure of hunting at the Blackwater lick had depleted the size of the herd animals to near extinction; however, the trails carved out by buffalo remained and were used by the hunters as the choice route leading from the frontier to Kentucky. The long hunters knew about the lick as early as 1761, and it was a landmark on the old hunters path from the New River to Powell Valley.

Land records tell us much about the route the hunters took to seek game around the large salt lick and the grazing grounds in Lee County. The Hunters path is well defined until it reaches the little salt lick, Duffield, but from this point little is known about the route to Powell Valley; however, the land surveyors made notations on their surveys that give clues as to the route of the path. A land grant to Arthur Campbell [LO 45-325] describes the location of the grant as being at the Hunters Gap in Lee County and on both sides of the Hunters path. This tells us that the Hunters path ran along the south side of Powell Mountain from Duffield to Blackwater and crossed the mountain at Hunters Gap. The path ran down Wallen creek to near it mouth on Powell river where again the land surveys pick up the route of the Hunters path.

Another grant to Arthur Campbell [LO Q-318] is described as being on the south side of the Powell River and on both sides of the Hunters path. This grant is located about one mile west southwest of where Wallen Creek flows into Powell river. The Campbell grant [LO Q-318] is adjoined on the west side by a land grant to Robert Preston [LO 27-57]. The Preston grant is described as lying on both sides of the Hunters path. From this information, we know that the Hunters path ran from near the mouth of Wallen Creek across the area known as the Rob bottoms and crossed the Powell River at White shoals. Again, the surveys tell us that the path ran in a north or northwest direction from White shoals as a grant to Robert Preston [LO 27-41]is described as lying on the west side of trading creek and one of the survey points is described as “white oak south side of the old Kentucky trace on John Ewing line with same”. From this point, the path or trace ran to Martins station but the exact route cannot be proven by land records.

Records show that Elisha Wallin and William Newman hunted around the Blackwater buffalo lick as early as 1761. Wallins Ridge and Newman Ridge were named after them. Other long hunters surely knew about the lick. Evidence of the buffalo trails remains on modern maps by the names of geographic features such as hunters ford, hunters valley, hunters gap and hunters branch. No doubt the long hunters in quest of game followed the herd animal paths from their favorite grazing grounds to the salt licks. There were many small licks in the area used by deer and other small game, but needs of the herd animals would require the mineral deposits of a much larger lick such as the Buffalo Lick at Blackwater.

The importance of the Blackwater lick is clearly pointed out by the claims of the land speculators. As early as 1775, Thomas Osburn had settled on land adjoining the Buffalo lick and obtained a land grant from the Commonwealth of Virginia by virtue of Right of Settlement.  “Washington County Survey Book 1,Page 389 Commissioners Certificate – on the forks of black water a north branch of Clynch River – beginning at the foot of Powells Mountain on the west side of the Buffalow Lick – at the foot of Newman’s ridge on both sides black water joining Powells Mountain, includes improvements, actual settlement made in 1775 – August 22, 1781”.

In the meantime, Walter Preston was issued a land grant from Virginia that bordered the Thomas Osborne grant and included the buffalo lick. To further complicate the issue Arthur Campbell also obtained a grant from Virginia that included the buffalo lick, all of the Thomas Osborne grant and much of the Preston grant. Apparently Preston ended up as the legitimate owner as he sold his grant to James White. The heirs of Campbell made an effort to reclaim their Blackwater grant, but I find no record that they were successful.  The Thomas Osborn grant ended up under the ownership of James and Stephen Osborn. A deed recorded in Lee County Deed Book 3, page 189: “Stephen Osborn & Comfort & James Osborn & Mary to William Roberts, 31 Jul 1810, DB 3-189. 400A by survey only the 1/2 of the Buffalo lick excepted for James Osborn the same being the west side of the said lick running through the middle thereof with the conditional line made by John Osborn & Roberts from thence marked around the lick on or near the bank of the same $650”. 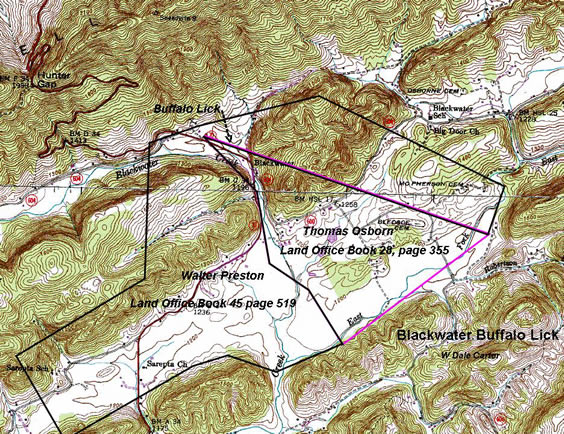 This deed shows that James Osborn reserved for himself ½ interest in the salt lick when the Thomas Osborn grant was sold to William Roberts. Apparently the lick site was developed as a salt works as a deed made 29 December 1817 and recorded in Lee County Deed Book 3, page 399, shows that William Roberts and his wife, Catherine sold ¼ part of a tract known as the Blackwater tract, to Jessee G. Rainey.  “Being a part of tract said Roberts purchased of James & Stephen Osburn. Including the lick premises and well, now occupied by said parties together and including 100 acres”.  The deed shows that by the year 1817 a well had been dug at the salt lick site. On 5 June 1818 William Roberts and wife sold 1/8 part including the lick premises and well recorded in Lee County Deed Book 3, page 405, and on 12 May 1818 William Roberts and wife sold ½ interest of the lick tract to Joseph and James McReynolds of Bledsoe County, Tennessee for $3,000. Recorded in Lee County Deed Book 3, page 406. The McReynolds deed shows that something of great potential lay within the boundary of the tract. At that point in time, land in and around Blackwater was selling for $1 to $2.50 per acre. The McReynolds paid $60 per acre.

From this time forward, the land records do not show what happened as to the ownership of the salt lick tract; however, on 19 January 1835, by order of the Lee County court, Jacob V Fulkerson, commissioner of the court, sold one moity of the Blackwater salt lick to Dale Carter of Russell County, Virginia. Carter was a large land owner and land speculator who owned large tracts in the Elk Garden and in present-day Wise County, Virginia.

Why all the interest in the buffalo lick? Most likely these early land speculators had visions of developing the site as a salt works much like the one at Saltville. In fact, a salt works was operated at Blackwater for a period of time.

In conclusion, the first white traders with the Indians and the long hunters used the buffalo lick at Blackwater as a well known land mark to describe the route from the frontier to the hunting grounds in Powell Valley and Kentucky. The buffalo paths from the grazing grounds led to the lick.  Daniel Boone in his aborted journey to Kentucky in 1773 most likely used the hunters path to the Powell river. It was a route well known to him and other hunters. The Boone party consisted of some forty individuals, pack horses and a small herd of cattle. A party this large would have had to follow a well-defined Buffalo trail to keep some order to their journey.

Lee County Order Book 2, page 364 27 Jan 1818; David Burk proposes an alteration in the road leading from the Blackwater salt works up Blackwater to the state line.

Who Was Dr. Andrew Jackson Osborne?