I remember Dad telling me that my great-grandpa, Elbert Roberts, attended a German Baptist Church in Blackwater.  The German Baptist were also known as “Dunkers” since they believed in completely immersing a person three times during baptism.  They are commonly known as the Church of the Brethren today.

I have tried to find a location for this church in Blackwater, Virginia without success.  However, I did find the following reference to it at a very information Church of the Brethren website, http://www.cob-net.org/antietam/dunkers.htm :

What did the Dunkers believe concerning slavery, at the official denominational level? Since the Dunkers or Brethren had migrated from Pennsylvania into a few southern States (Maryland, Virginia) with significant slave populations, the issue of slavery would inevitably confront them denominationally at their Annual Conference. The earliest record of an official mention was in their Annual Conference minutes for 1797, held at Blackwater, Virginia: “It was considered good, and also concluded unanimously, that no brother or sister should have negroes as slaves; and in case a brother or sister had such he or she was to set them free.” [1] This had the effect of barring members from Communion and even disfellowshipping those who persisted in retaining slaves. Again the issue was similarly reflected in the minutes of the 1713 Conference held at Coventry, Pennsylvania.”

This is interesting since my direct ancestors fought for the Union although they were Southerners.

Here is another information web site:  http://www.nps.gov/anti/historyculture/who-were-the-dunkers.htm.  Apparently, German Baptists played a big part in the battle of Sharpsburg. 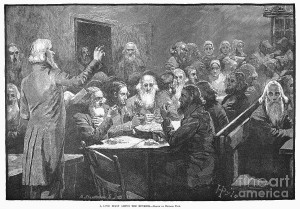 German Baptists or Dunkers typically dressed similarly to the Amish and Mennonites.  They could be easily identified by their beards with no mustaches.  This reminds me of a story that Dad and Grandpa Baker told me when I was a kid.  I’m not sure if it was based on a real story or just a joke, but here is how it goes:

A German Baptist was riding a train and noticed that the man sitting across from him kept staring at him.  Finally, the man asked him, “Why do you wear your beard that way?”.  The German Baptist replied that he was a Dunker.  The man responded, “Well, I like to have a drink or two myself.  But I still don’t understand why you wear your beard that way.”

I hope that I didn’t offend you.  My Dad and Grandpa got tickled when they told that story.

If you have any more information on the German Baptist Church in Blackwater, I would love to hear it.  I have found a possible former location on the Blackwater Creek.  But I only have GPS coordinates for it.